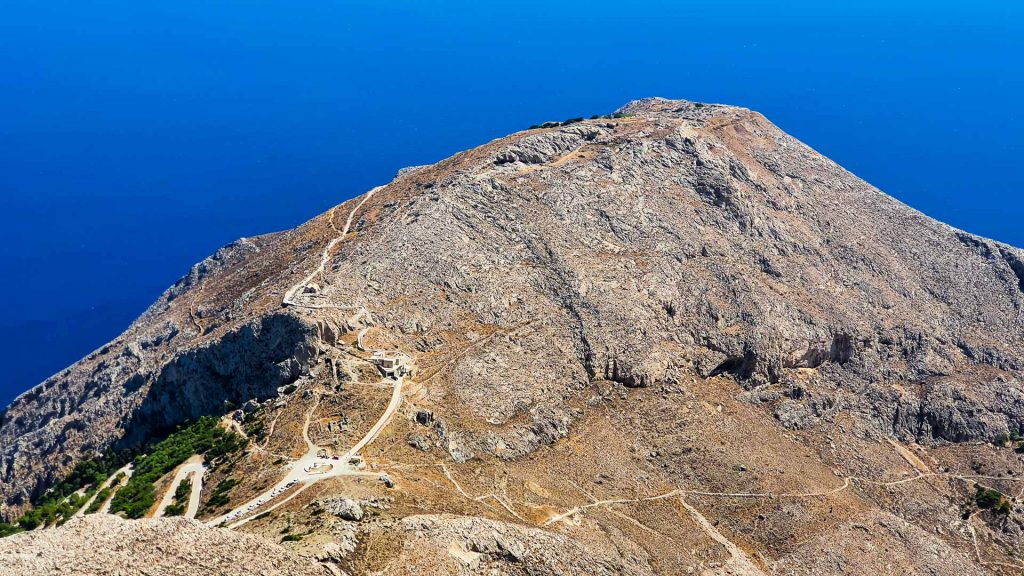 Ancient Thera in Santorini was an ancient city that was located in the south-eastern part of the island on a rocky mountain called Mesa Vouno, over 360 meters above sea level. Currently, this place is adjacent to two very popular towns on the opposite sides of the mountain – Kamari and Perissa.

The ancient Thera is an unquestionable “must see” during your stay on Santorini. Here you can learn about the world of the ancient Greeks who lived on the island, deepen your knowledge of ancient history and culture, and enjoy beautiful panoramic views of the Aegean Sea and the island of Anafi looming in the distance.

A history of discovery

In 1895, the German archaeologist, Friedrich Hiller von Gaertringen, began excavations in the city, which were systematically carried out until 1904. This resulted in the discovery of a residential area and some cemeteries. Another discovery took place in the years 1961-1982, when N. Zapheiropoulos was working under the patronage of the Archaeological Society in Athens. It was then that the excavation of the necropolis of Sellada, a mountain saddle between the hills of Profitis Ilias and Mesa Vouno, was excavated. Finds of these works can be seen in the archaeological museum in Fira.

Subsequent excavations were carried out under the direction of Wolfram Hoepfner from Freie Universität Berlin in 1990-1994. Thanks to these discoveries, the history of the southern Aegean Sea could be better understood.

The history of ancient Thera dates back to the 9th-8th centuries BC. The city was founded by Doric colonists from Sparta. The place was chosen because of its strategic location. Namely, apart from the fact that Thera is located on a rocky mountain, it connects via a ridge called Sellada to the highest peak of Santorini, Profitis Ilias. Additionally, the slopes of Mesa Vouno joined the ports of Oia to the north (now Kamari) and Elefsina to the south (now Perissa). Thanks to this, it was not necessary to build defensive walls. The city also had access to the sea, and thus could conduct free trade.

The most important stage in the history of the city began in the 4th century BC. At that time, the Macedonian Ptolemaic dynasty, ruling in Egypt, conquered Thera. The city began to serve as a naval base. As a result, soldiers appeared in it. Initially, it was three officers and about 300 soldiers, and over time this number increased. It was then that the expansion of the city began. Many temples were built in honor of Egyptian deities, public buildings, and peristyle houses. Also in the 1st century BC, when the island became part of the Roman province of Asia, many buildings were modernized, and public baths, characteristic of the Roman Empire, were built. Although Thera was not a large city and was located on the outskirts, it was of great importance at that time, as evidenced by the wealth of the town and the fact that its representatives gained high official positions.

However, around the 3rd century AD with the fall of the Roman Empire, the importance of Thera began to diminish. Moreover, some point out that the inhabitants began to move to where the terrain was more favourable. In Byzantine times, it was sometimes mentioned in documents as a diocesan city. Until the 5th century it was the only urban settlement on the island. The chronicler Theophanes mentions that in 726, there was a volcanic eruption, which was not particularly large, but which caused the city to be covered with a layer of pumice and, as a result, soon abandoned by the inhabitants.

Life and culture of ancient Thera

Over the course of more than a thousand years of history, many changes have taken place there. This was the result of a common phenomenon of evolving customs, culture and other factors. Ancient Thera was under the sovereignty of various countries and different peoples came there. In addition, there was a port there and trade facilitated contact with overseas places. These factors led to changes in the organisation of the city, its appearance, the customs of its inhabitants, culture and crafts. Thus the final shape of the city, which has been reconstructed by archaeologists, was the result of many factors from different times.

In the middle of Ancient Thera ran a road about 800 m long and 2 – 4 m wide, from which narrow streets ran perpendicularly, sometimes being dead ends.

The most important buildings in the city were:

It was located in the centre of the town. It was a rectangular square 110 m long and between 17 and 30 m wide. It was extended both under the Ptolemies and the Romans. It was the main place of gatherings as well as a place of worship. Around it there were public buildings and houses.

It was a colonnaded building of Doric architectural order. It measured 46×10 m and its construction dates back to the beginning of the 3rd century BC. It was used for official and administrative matters. On one of the walls there were plaques saying that a citizen of Thera pledged to pay for the renovation of the building. On the other wall there was information about a resolution of the assembly of citizens and the council in honour of that citizen. The building was an ornament of the town, as it was crowned with a sculptural decoration. There were also monuments to Caesar and his family.

Theatre was a very important place for the ancient Greeks. Performing plays was, among other things, part of the festivals in honour of Dionysus. The theatre in Thera was located near the Agora. It was built in the second century BC. It could accommodate as many as 1500 people, which was more than the population of the city. It was also used as a council meeting place (or buleuterion). In the 1st century AD. the theatre was adapted to the Roman style.

The building was a gymnasium for ephebes, or young men aged 18 to 20, who were undergoing compulsory military training before becoming full citizens.

There were many temples in Thera, both Greek, Egyptian and Christian. They came from different times. It was possible to identify the following places of worship, among others:

In addition, there were also temples of Hera, Aphordite, Dionysus, Apollo Pythios and other buildings such as the residence of the Ptolemies, the commandant’s house, the house of Tyche and the soldiers’ barracks. Of course, today only the remains of ancient buildings from Hellenistic and Roman times can be seen, with plaques describing the individual ruins.

During the excavation works archaeologists also managed to find:

The found artefacts are now housed in the Prehistoric Museum in Fira, and Apollo’s kouros can be seen in the National Archaeological Museum in Athens.

For a long time the excavations remained abandoned. It was not until the XXI Ephorate of Prehistoric and Classical Antiquities that the project “Configuration and establishment of the archaeological site of ancient Thera” was created. It was included in the Peripheral Corporate Programme South Aegean 2000-2006 and co-financed by the European Union. Thanks to the project, it was possible to achieve the objectives of conservation and protection of monuments and the arrangement and organisation of the archaeological site, as well as securing the infrastructural base.

Opening hours of the archaeological site:

The price of a full ticket is 6 euros, while a reduced ticket costs 3 euros.

It is also worth noting that, for example, on national holidays or days associated with cultural heritage, admission is free. These include:

How to get to ancient Thera?

A winding road leads to the Ancient Thera from the seaside village of Kamari. It is accessible by car from 7:30 a.m. to 5:30 p.m. Pedestrian traffic is prohibited during these hours. The latter can only use it after 5:30 pm.

We encourage you to go for a walk to Ancient Thera along one of the picturesque routes:

Another curiosity is the finding of interesting rocks, such as andesite and scoria, in the Sarcient Thera area. Naturally, they do not occur at this site, but at least a few kilometres away. They were probably brought by the Spartans during the construction of the city. Although it has not been fully explained why these rocks were used and what their exact application was, the determination and perseverance of the Spartans, who brought heavy rocks from such a long distance to a high mountain, is admirable.