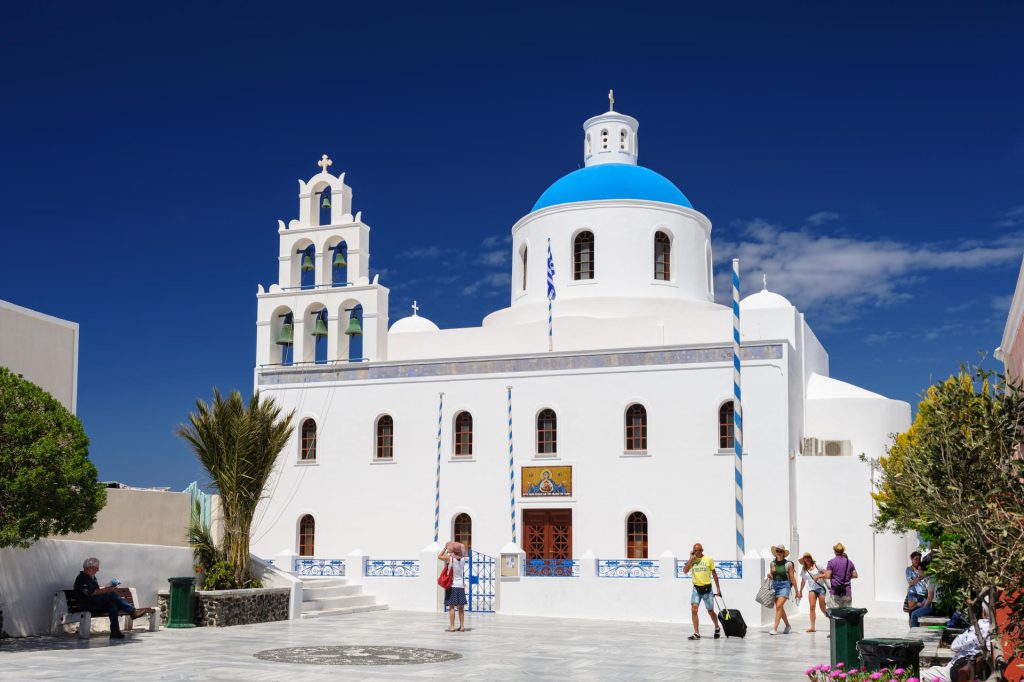 The Church of Panagia Platsani is undoubtedly the most famous and impressive church in Oia and the entire northern part of the island. It is located in the heart of the village, on the main square.

The white building is built on a square plan, has five domes, the largest painted blue. The front of the building is decorated with arched windows and has a bell tower in the shape of a pyramid containing six bells. Above the entrance door there is a gilded mosaic.

The church of Panagia Platsani was originally located within the walls of the Venetian Castle of Oia. The church was ruined during the earthquake in July 1956 and was rebuilt in its present location due to the unstable condition at the original location and the danger of collapse.

According to legend the icon of the Holy Mother placed in the Temple of Panagia Platsani was found in the sea. While fishing, the fisherman saw a light resembling a lit candle in the middle of the sea. Heading towards it, he found the icon of the Mother of God, but he could not pick it out. So he informed the local priest who, together with the inhabitants, while praying and carrying torches, went down to the sea, fished the icon and with great respect moved it to the local church.

The next day the icon disappeared. After a long search, she was found by the wall of the Castle in Oia. She was placed in the local church again, but the next day she was not there again. This happened for many days, until the residents understood that the icon chose a location where to build a church – a place from which she could see the sea and the sailors sailing that she could bless.

The name of the church “Platsani” comes from the sound of waves hitting the icon floating in the sea (“plats – plats”).

The church is dedicated to the Standing Hymn to the Mother of God (Akathistos Theotokos). According to legend, this name was created to commemorate the siege of Constantinople in 626 CE. by the Persians, Sassanids and Avars. Residents managed to defend the city. In the evening they gathered in the Church of St. Mary of Blachernae (Istanbul) to sing thanksgiving songs together. Singing, they stood all night, hence the name of the hymn “akathistos” or standing.

Worth seeing inside the church are:

The origin of the original church dates back to 1820 or earlier, the current church was built in 1965.

On the square, in front of the church, there is a mosaic embedded into the pavement depicting an anchor and 3 dolphins with the inscription “2007 KOINOTĒTA OIAS” (Community of inhabitants of Oi 2007)

Location of Panagia Platsani on the map: