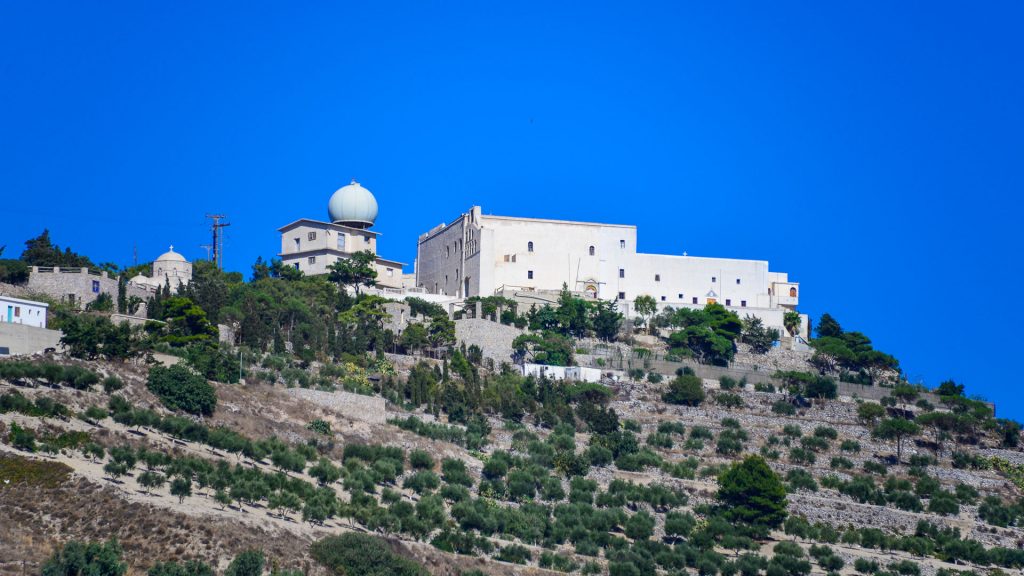 The Greek island of Santorini abounds in religious monuments, including churches, chapels and monasteries, most of which feature unique Cycladic architecture. One of the oldest and most impressive of its kind is the Orthodox Monastery of Prophet Elijah (Monastyr Prophet Elias). It is located on the highest peak of the island of Santorini (567 meters / 1860.2 feet above sea level).

History of the Monastery of Prophet Elias on Santorini

The Prophet Elias Monastery, is located in the south-eastern part of Santorini, on top of the mountain Profitis Ilias, 3 km from the village of Pyrgos, which is the highest settlement on the island. From the top of the mountain Prophet Elias, measuring about 567 m above sea level, there is an impressive view of the entire island. It was here that two monks, Joachim and Gabriel, founded the Monastery of Prophet Elias in 1711. The founding letter authorising them to “build a monastery for men to work for God” was signed by Zacharias Gyzis, Bishop of Thira, on 6 March 1711.

The founding decree set out (among other things) the following principles of monastic life:

From the very beginning, the monastery, built in fortress style, was an extremely important cultural, educational and even economic centre. It possessed numerous riches, including a ship used for trade with other centres in the Aegean and the Mediterranean.

Between 1806 and 1845, the monks ran a school where Greek language and literature were mainly taught (Church of Holy Apostles in Pyrgos). The monastic community has subsidised numerous educational and charitable projects over the years, such as:

In the 1860s the monastery began to decline, and almost a century later it was severely affected by the earthquake that hit Santorini in 1956.

Interesting fact: The monastery of Profitis Ilias on Santorini was a place of exile for unruly and inconvenient clerics from mainland Greece in the 19th century. The inmates were treated as follows:

There are currently 9 monks living at the Monastyr Profitis Ilias on Santorini, and the abbot of the place is Father Damaskinos. The monastery continues its charitable activities for the benefit of the local community.

All monks, in addition to prayer, are required to give something of themselves to the monastic community. Each of them is assigned specific duties called diakonima (daily work). In addition to their duties at the monastery (celebrating Mass, cooking, cleaning), the monks are also involved in the cultivation of vines, olives and other vegetables and fruits, and their subsequent processing. Some of these products can be bought in the small shop in the Chapel of St Nectarios.

Tourists can enjoy products such as wines, liqueurs, olive oil, olives and olive preserves, fig preserves, herbs, as well as other souvenirs.

When spending your holiday on the Greek island of Santorini, it’s absolutely worth to visit the Monastery of the Prophet Elijah. Although the monastery itself is not open to visitors, you can enter the chapel of St. Nectarios (built in 1967), where you will see colourful frescoes adorning the walls and ceiling and icons, there is usually beautiful, atmospheric religious music playing. Besides, it’s worth taking a walk around the courtyard, from where you can admire the beautiful panorama of the island. Inside the chapel’s courtyard is also the small church of Archangel Gabriel (Taxiarchis Gavriil), which was built in 1924.

How to get to the Monastery of the Prophet Elijah on Santorini?

There are three options to choose from:

There is no public transport with which we could get to the mountain Profitis Ilias.

In addition, the former chapel of Agia Triada in Pyrgos, which once belonged to the monastery, houses a museum where we can see a collection of rare ecclesiastical artefacts, hand-written books, as well as unusual Byzantine icons and sculptures. There are also exhibitions relating to local crafts, namely printing, shoemaking and candle making.