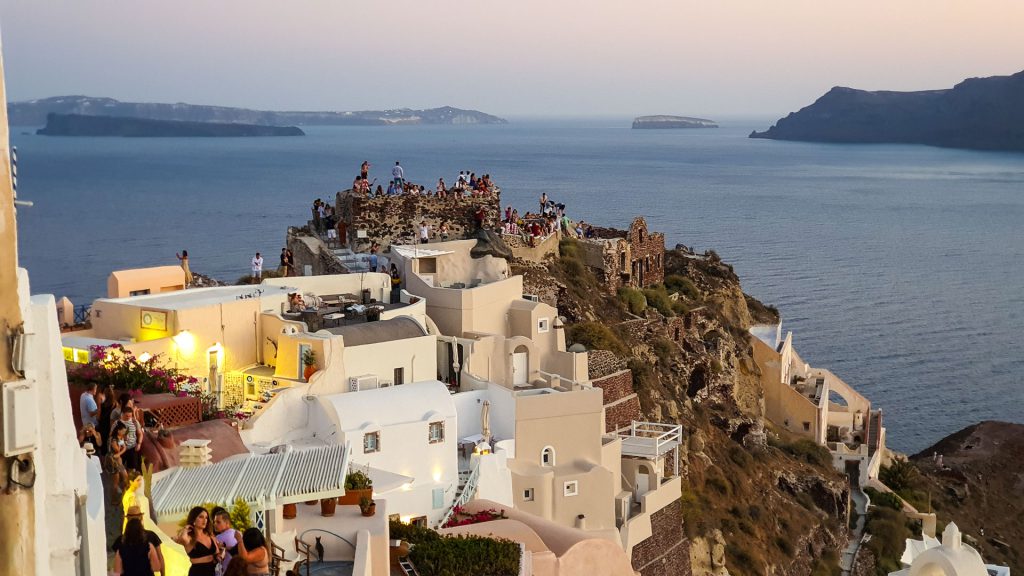 Although not much remains of the castle, it is one of the biggest attractions of Santorini and one of the most popular and most crowded places to watch the famous Santorinian sunset.At the north-western tip of the island of Santorini, in the town of Oia, on the cliff steeply falling into the waters of the Aegean Sea, are the ruins of the Venetian castle of Agios Nikolaos.

One of the biggest threats to island inhabitants in the Middle Ages were the pirates. The Greek islands, including the island of Santorini, were very often attacked by pirates who plundered the property of the population, enslaved men and sold them at slave markets, as well as kidnapped women and sold them to Muslims to the harem.

Hence the characteristic style of construction – the inhabitants built their houses close to each other, in hard-to-reach places, on the cliffs, in such a way that the walls without windows and doors were faced outside creating a “ring” of defensive wall. This type of ring from houses surrounded the castle, with observation towers were added to them in some places.

Residents, when they saw that they would not be able to face the threat, fled to the castle or inland, and hid valuable assets in the pits dug under the castle.

The castle dates from the late 15th century (the first written mention of it dates back to 1480). It was built by Venetians, like four other castles on the island of Santorini (Skaros Castle in Imerovigli, Castle in Pyrgos, Castle in Emporeio and Castle in Akrotiri). Agios Nikolaos Castle in Oia was inhabited by the Dargent family, who were descendants of Romanos Argyros, a Byzantine emperor.

Its location made it an excellent point for observing the surrounding waters and looking for the impending threat. In the middle of the castle there were residences belonging to the Venetian rulers. It was a defensive object difficult to conquer, but it was captured by Turkish invaders in 1577, and the Dargent family was captured in Syria.

The castle and surrounding buildings were one of the most impressive settlements on Santorini. In addition to residential buildings and noble residences, there were several churches and warehouse.

The building suffered severely in the earthquake of 1956, when most of the castle collapsed into the sea. Currently, only the tower remained from the castle (known as Goulas, from the Turkish word Koules or tower), with a fragment of the residential part and fragments of the walls.

From the castle there is a beautiful view of the entire caldera and the archipelago of the Santorini islands. Looking south, we can see the volcanic islands of Nea Kameni and Palea Kameni, as well as the southern end of the island of Thira. In the southwest, on the other hand, there is the clearly visible, somewhat forgotten Thira’s smaller sister – Thirassia.

Location of Castle of Oia on the map:

View of Castle of Oia on Street View: