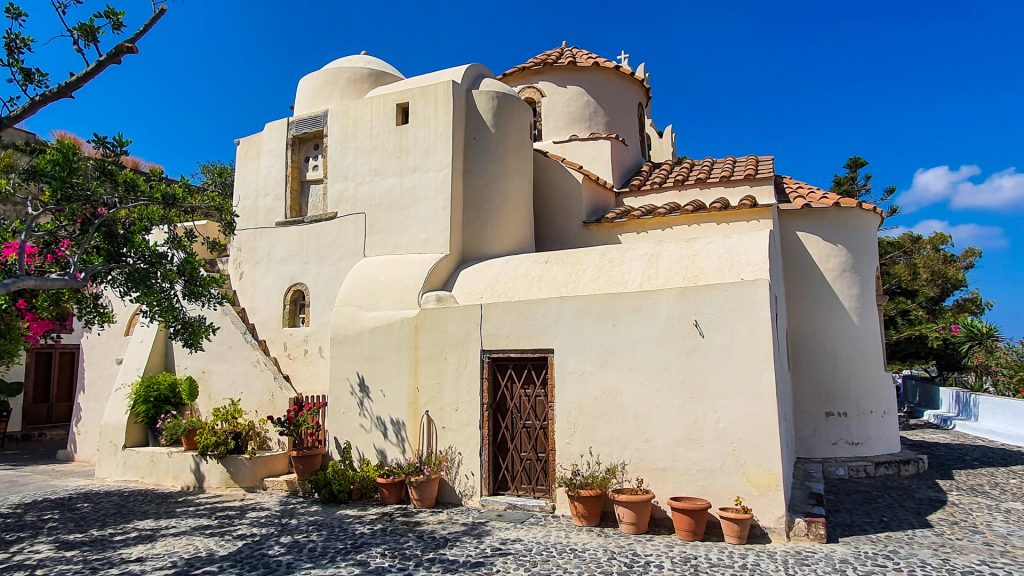 The oldest Byzantine church on the island of Santorini, the Panagia Episkopi is a special place for many Greeks. Continuously since the 12th century, it has been a place of religious worship and an extremely important place for the faithful who come here.

The church and its icons have survived many invasions (by Venetians, Franks, Russians and Turks, among others), fire and earthquake. The faithful are convinced that it is the Blessed Virgin Mary (Panagia), to whom the church is dedicated, who takes care of it.

Into the depths of history

The Church of Panagia Episkopi was built at the foot of Mount Profitis Ilias, the highest peak of Santorini, near the small village of Mesa Gonia, not far from the east coast of the island, at a distance of 2 km from the well-known tourist town of Kamari.

There are several accounts of the origins of the church. One of them says that its donor was the Byzantine emperor Alexis I Comnenus. Inside the church there is a fresco with his likeness and a destroyed inscription with a reference to him.

There is also a legend saying that an icon of Mary mysteriously disappeared from a nearby chapel and appeared at the site of the present church. The local inhabitants interpreted this as a sign that Mary wanted a church to be built on the site.

The Church of Panagia Episkopi on Santorini was built on the site of a three-nave Christian basilica (probably some elements of the basilica were used to build the present church). Elements from Ancient Thera (so-called spolia) were also used in the construction, including fragments of Doric columns and reliefs.

It was built at the turn of the 11th and 12th centuries (some sources cite 1115 as the most likely year of construction). It was first documented in 1207.

In the 13th century the island of Santorini was conquered by the Venetian Republic. The Orthodox bishop was then expelled from the church. His place was taken by a Roman Catholic bishop. It was then that the epithet Episkopi, meaning ‘bishops’, was added to the name Panagia to denote the seat of the displaced bishop.

In the 16th century, the Orthodox bishop returned to the church (of course, no longer specifically the same one) and his episcopal properties, as the island was conquered by the Ottoman Empire. However, the Catholics living there, who until then had benefited from the church lands and rich harvests, did not accept his return. A conflict began, partly armed, between them and the Orthodox population, which lasted until the 18th century. The dispute was resolved by dividing the church property between the believers of both rites, and adding a chapel to the church, where services were to be held for Catholics.

In the early 19th century, the Orthodox diocese was moved to the island’s capital and the church’s property was gradually expropriated.

The Panagia Episkopi Church on Santorini survived the fire of 1915. Most of the church’s books and documents were destroyed. The building and all the icons survived. After the earthquake of 1956, the church required major renovation. Its reconstruction lasted until 1986, during which time 26 precious icons were stolen and never recovered.

Precious monuments of the church of Panagia Episkopi on Santorini

While in the church, it is also worth paying attention to:

The brick, beige (rather than white and blue like most religious buildings on the island) church was built on a cruciform plan 14 mi long by 11.1 m wide. It is crowned with a dome made of red tiles. The building has five entrances, the main gate being on the west side. In the north-western corner of the building there is a bell gable with four bells.

Every year on 15 August, the Panagia Episkopi church celebrates the most important feast of the Virgin Mary of the Greek Orthodox Church. Crowds of believers take part in solemn services accompanied by a procession with historical icons from the church. At the end, all guests are treated to bean soup and local wine.

There is ample parking in front of the church (also for coaches). Entrance to the church is free of charge.