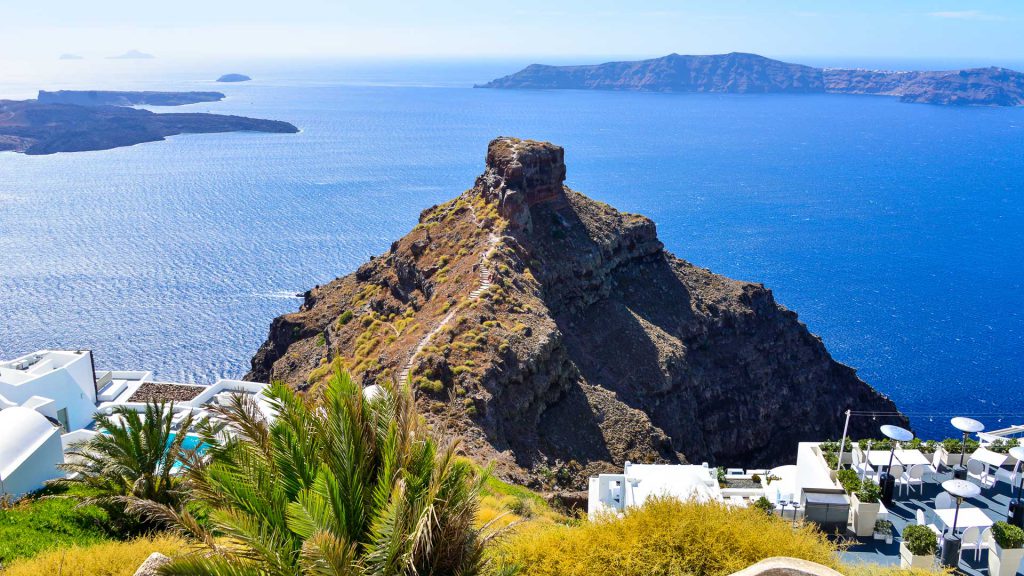 Skaros Rock is a large volcanic promontory extending into Santorini’s caldera, on which are the (now barely visible) ruins of the fortress of Kasteli, built between 1205 and 1230. The promontory itself was probably formed during a volcanic eruption that took place 68,000 BC.

Certainly Skaros is one of the most impressive sites on the Greek island of Santorini. On this large headland, located below Imerovigli, the oldest and most significant defensive settlement was located, which until the 18th century was considered the capital of Santorini.

The fortress of Skaros was intended to protect against pirates, who successfully conquered the Aegean coast in the late Middle Ages, as well as hostile troops, mainly Turkish. The entire fortified settlement was made of stone, and was connected to the rest of the village by a movable wooden platform.

Amazingly, within its relatively narrow boundaries there were around 200 buildings, including a church and a monastery, all in the vicinity of labyrinth-like streets. At the summit was a large bell which rang to warn the inhabitants of impending attacks. At the base of the rock was a small harbour, which unfortunately no longer exists today.

Legends say that Skaros Rock on Santorini was never conquered. However, it was destroyed by a series of volcanic eruptions and earthquakes that forced the inhabitants of the time to flee to the nearby villages of Imerovigli and Fira. Skaros Castle was probably abandoned for good by most of the inhabitants as a result of the earthquake of 1701-1711.

Today the Skaros rock is completely uninhabited. Only ruins remain of its former glory, including traces of a drawbridge and two chapels.

The tour of Skaros Rock starts in Imerovigli and the church of Agios Georgios (Saint George). Just a few metres from this church there is a path leading to Skaros, or more precisely, a wide cement staircase. After a few minutes you reach the chapel of Agios Ioannis Apokefalistheis. On the way to the top of the mountain, you can see the remains of buildings and cave houses.

There is no trail leading to the top of Skaros Rock, but some of the more fit hikers climb it anyway.

On the way back it is worth taking the second trail – a little more difficult, because it is much narrower, but after about 200 steps the second chapel of Panagia Theoskepasti, built on the edge of the cliff, is waiting for persistent tourists. This lonely, white church impresses with its picturesqueness and is a perfect place for a rest. It offers a unique panoramic view of the caldera and nearby islands.

Such a trip to Skaros lasts about 1,5-2 h. It is worth remembering to take appropriate sports shoes, headgear, sunscreen and something to drink.

How to get to Skaros Rock on Santorini?