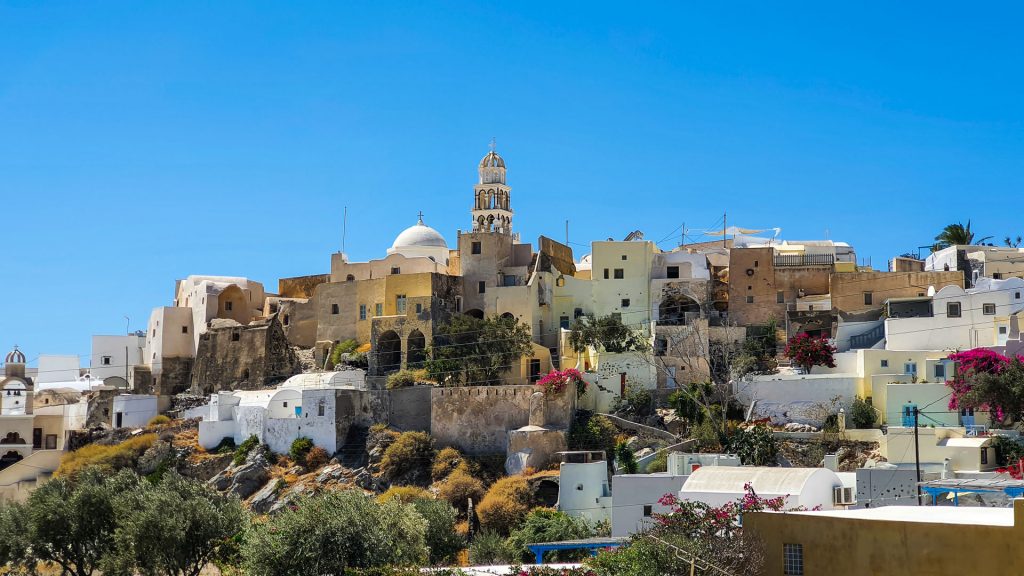 Emporio or Emporeio (Greek: Εμπορείο), also known as Nimborios (Greek: Νημποριός), is a city located in the southern part of the island of Santorini.

It is located 9.5 km from Fira and 11 km from the airport. The village is bounded from the north-east by the Profitis Ilias massif (the highest mountain in Santorini), and from the south by the Gavrilos hill.

Emporio belongs to the administrative unit of South Aegean, the regional unit (municipality) of Thira.

The population of Emporio is more than 3000 people (according to the 2011 census).

Emporio is the largest city in Santorini in terms of population. In the Venetian period, Emporio played an important economic role – there was a commercial centre with a port located in the town of Perissa.

There are various theories about the origin of the name Emporio. However, the prevailing view is that the name comes from the Greek word Εμπορείο, which means “trade”, since the settlement was a centre for buying and selling all kinds of goods.

What is worth visiting in Emporio?

The village has a long history, and a walk through the old town is like a journey through time. In Emporio you will find colourful, historic buildings and narrow streets, full of corners where you can admire the original architectural details. Emporio is a labyrinth that will appeal to anyone who likes to explore and get lost in the narrow streets.

Visiting the old town of Emporio can be started from any point of the city, as everywhere you can see signs directing to Kasteli. Following them, you can begin to explore the labyrinth of streets of the old part of the city, which are very narrow and filled with traditional houses. They are really well maintained, and it is pleasant to admire their architecture with original arches and corners.

The most well-known monument in Emporio is the castle of Kasteli, which was one of the five Venetian castles built on the island. It was built in the heart of the settlement probably in the 15th century. Thanks to its strategic location, the castle was used to protect residents and commercial buildings. Inside the castle is the church of Panagia Mesani from the 16th century with a well-preserved bell tower, which looks impressive also due to the fact that it is surrounded only by low buildings.

The entire walled settlement is called a “castle” (it includes fortifications and about 80 houses).

Slightly outside the labyrinth of streets is the Nimborio Tower, also known as “Goulas”. It was a square watchtower, supposedly connected to the castle by an underground passage.

Like all other towns in Santorini, Emporio is also full of churches – historic and more contemporary. Apparently, before the earthquake in 1956 there were about 260 churches in there.

In the village of Emporio you can also see the church of Agios Nikolaos Marmaritis. It is an ancient temple and an ancient sacred place from the 3rd century BC. The square temple in the Doric style of grey marble was dedicated to the goddess Vasilea and was transformed into a Christian church in the 4th century AD.

Visiting Emporio and the surrounding area, you should necessarily go to the black beach of Perissa or Perivolos, which is its extension. It is a well-organized holiday destination with umbrellas, sun loungers and a wide selection of beach bars. The beach is located 4 km (2.5 miles) from Emporio.

Those looking for less obvious and crowded attractions can take some interesting walks – to the Gavrilos hill (full of historic windmills from the 19th century), the Chalarovounia hill (with an old, destroyed windmill and the remains of a Minoan settlement) and to the church of St. Catherine, located in a ravine at the foot of the Profitis Ilias massif. In the vicinity of Cape Exomitis, you will come across the remains of tombs belonging to the ancient city of Eleusis.

Another interesting destination located near Emporio is the village of Vlychada (about 3 km away from Emporio and less than an hour walk). You can also see the former tomato processing plant, now turned into a museum.

Although Emporio is not a typical holiday resort, it has a comprehensive and modern accommodation base. You can find both exclusive hotels where you have at your disposal an outdoor pool and sun terrace, as well as guest rooms and cheaper guesthouses.

In Emporio, tourists have at their disposal several dozens of accommodation facilities. Prices in the high season range from 100 euros to several hundred euros per night for two people. Prices in the low season are definitely lower and start from 50 Euro per night in a two-bed apartment.

When visiting Emporio, it is also worth tasting dishes served in local restaurants. In Emporio there are many regional restaurants where you can try Mediterranean cuisine. It is worth emphasizing that the dishes served on Emporio are not only tasty and original, but also their prices are more affordable than in restaurants located in the most popular towns of Santorini.

Emporio on the map