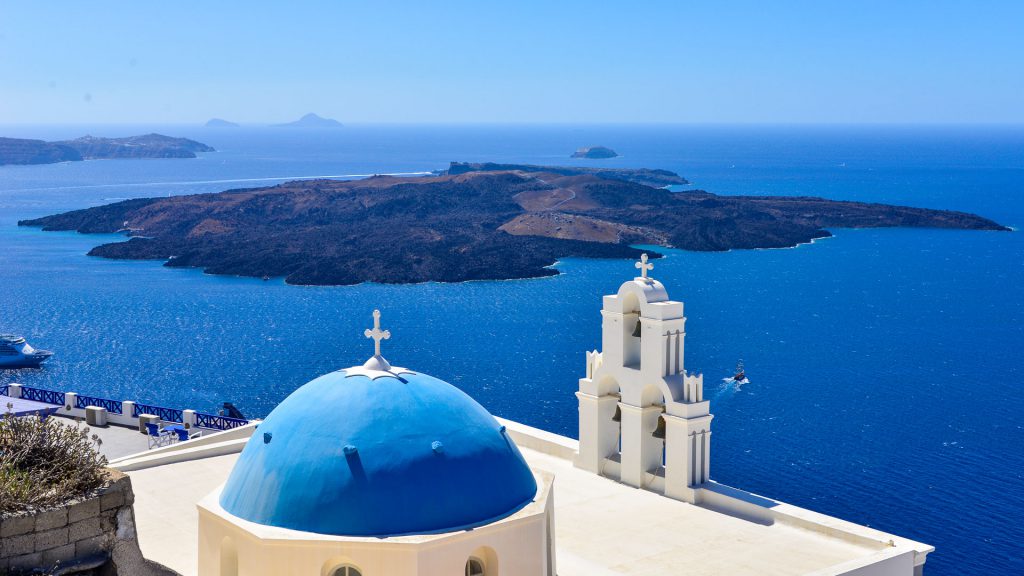 Nea Kameni is a small island situated in the gulf of Santorini. Its history is directly related to the volcano, whose eruptions and lava flow formed all the surrounding islands. The width of the island of Nea Kameni is about 2 km and its total area is currently 3.4 km².

The Santorini volcano and the birth of the Caldera

Before the huge, doomsday eruption that took place some 3,600 years ago, the area was larger and shaped like a circle. The eruption at Strongili, as the island was then called, caused most of the island to sink deep into the water, forming a large caldera. During subsequent eruptions, many formations were created on its periphery and interior, of which five separate islands have survived until today: the most popular – Thira (known as Santorini), much smaller – Thirasia, uninhabited – Aspronisi and famous for its hot springs – Palea Kameni and the volcano island – Nea Kameni.

The Santorini caldera has impressive dimensions. With a diameter of 10 km it is one of the biggest in the world. The morphology of the terrain makes the archipelago very unique and spectacular. The villages built on its cliffs offer unforgettable views.

The highest point of Nea Kameni is a volcano crater rising to a height of about 150 m above sea level. However, it does not stand out significantly in the landscape of the island, because in its vicinity there are several hills and craters formed as a result of gas explosions. The island has a truly lunar landscape, which is best admired in the morning, when there are not so many tourists in the area.

Volcano as a tourist attraction

Santorini Volcano is a very popular tourist attraction. The possibility of looking deep into the crater, seeing smoke coming out of volcanic rocks, the smell of sulphur in the air arouse slight anxiety, but also fascination combined with excitement. In short, the unique experience of walking on solidified lava is something you must experience when going to Santorini.

Every day, from many places on the island of Santorini, coaches leave for the harbours, from where you can continue your journey by boat towards the famous volcano. Boats leave from two places. The old port of Fira and the new port of Athinios, which are about 12 km apart.

Local tourist agencies and travel agencies offer a variety of tour packages. They differ from each other in price and in the number of planned attractions. Everyone will find the perfect option for themselves. From inexpensive short excursions to Nea Kameni, to more expensive full-day excursions, guaranteeing a visit to the nearby island of Therasia, which originally formed an integral part of Santorini.

Visiting a volcano – what to look out for?

Walking on the volcano is a unique experience, although in the summer heat of almost 40 degrees, climbing the 150 meters high crater can be really tiring for some. All this effort is compensated by the wonderful views of the Santorini Caldera.

A small fee is required to visit the volcano. This amount varies from year to year (in 2021 it was 2 Euro) and all income from tourism on Nea Kameni is used to keep the islet in good condition.

The most sensible thing to do is to arrive here in the morning as not many tourists voluntarily decide to get up at dawn. Such a trip is then much more pleasant than, walking in a large crowd.

In addition to the main crater you can also see several smaller ones. The seismic station is another noteworthy point of the hike. It should not be forgotten that this is a volcanic island, so it is in vain to look here for trees, which will protect from the hot sun.  It is therefore necessary to bring sunscreen and headgear to protect against sunstroke, as well as water, as there is no shop on the island.

Most trips to the volcano are organized in conjunction with a visit to the nearby island of Palea Kameni.

It takes about 2 hours to walk around Nea Kameni. A yellowish sulphur deposit is visible on the crater walls and the air is permeated with the smell of sulphur. The walk takes place on rocky paths, sometimes steep, so it is worth getting comfortable shoes, preferably ones that reach behind the ankles.

On the neighboring island of Palea Kameni there are springs with hot thermal water. Here you can enjoy a sulfur mud bath. The beneficial properties of sulphur are known all over the world. Sulphur soaps can cure skin problems such as acne. That is why a swimming costume is an essential attribute for those who come here. The water temperature in the hot springs is not as high as in other thermal waters, but it is warmer than the sea by several degrees.

Interesting facts about the eruption of the volcano of Santorini

History of the eruption of the volcano of Santorini – calendar

The most impressive and devastating eruption in the history of the Santorini volcano took place over 3600 years ago, and is referred to by historians as the “Minoan Eruption”. It occurred in the late Bronze Age and had a huge impact on the entire eastern Mediterranean. Although the huge eruption of the Santorini Volcano is today considered to be very well studied, in many ways it still is an unexplained mystery.

It was an eruption that probably laid the first foundations for the island known today as Palea Kameni.

There was a strong volcanic eruption in 726, however, the volcanic lava outpouring was probably not large.

Although reports from these years are inconclusive, it can be assumed that as a result of volcanic activity during this period Palea Kameni collapsed and disappeared under the surface of the water.

This eruption is in turn connected with the appearance of the island of Mikri Kameni – a small dome of solidified lava and ash slightly rising above the surface of the sea. As a result of subsequent eruptions it merged with another island.

On 27 September 1650 there was an eruption of the undersea volcano Columbo, which generated a huge tsunami.

The intense activity of the volcano, which poured out large quantities of lava between 23 May 1707 and September 1711, resulted in the lowering of the coastline of the existing islets and the creation of Nea Kameni.

From the 4th of February 1866 to the 15th of October 1870 there were a few explosive activities. As a result of this volcanic activity, the islands of Mikri and Nea Kameni merged into one larger island. Previously, they were separate entities forming the bays of Georgios and Vulcano.

As a result of the moderate activity of the volcano during this period, lava flows and ash waterfalls have significantly expanded Nea Kameni.

The lava flow to the volcano surface during this period was mostly preceded by warning phreatic explosions.

The eruption in 1950 is considered one of the weaker ones, however the damage it caused was greater than that of the previous two eruptions.

Nea Kameni is the youngest volcano located in the eastern Mediterranean. The volcano has erupted nine times in the last 2000 years. Its activity is still observed today, although the last eruption took place in 1950. It should not be forgotten, however, that this area lies in a seismic zone. There are frequent tremors, and the magma hidden under the rocks increases in volume, heralding a possible eruption in the future. For this reason, the volcano is under constant scrutiny by scientists: seismologists and volcanologists. However, the Greek Government maintains that there is currently no cause for concern because there is no reason to believe that the Santorini volcano will erupt in the near future.