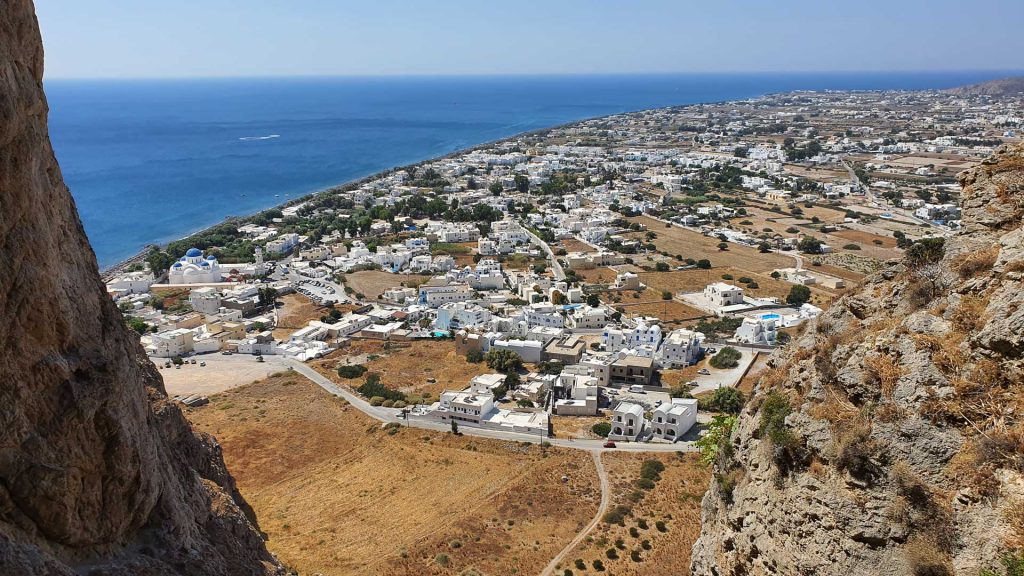 Perissa is a typical holiday resort located in the south-eastern part of Santorini.  It stretches for over 2 km along the shores of the Aegean Sea and the Gulf of Perissa.  On the north side, the natural border of Perissa is the Mesa Vuono mountain. A second similar beach and a village of Kamari stretches behind the mountain. On the west side, Perissa is adjacent to the village of Emporio, and on the south side to Perivolos (and further Agios Georgios). Perissa, Perivolos and Agios Georgios have no clear boundaries and flow seamlessly one into the other.

Perissa belongs to the administrative unit of South Aegean, the regional unit (municipality) of Thira and community (locality) Emporio. 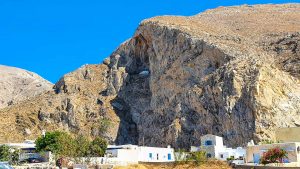 The Panagia Katefiani in Perissa on Santorini is a small chapel dedicated to the Virgin Mary built into the hillside of Mesa Vouno above the village of Perissa. The church is located on the trail from Perissa to ancient Thera. The walk from Perissa takes about 15-20 minutes. 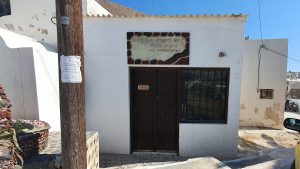 Museum of Minerals and Fossils in Parissa

The Mineral Museum in Perissa, Santorini was founded in 2006 by the Thera Cultural Society. The museum showcases minerals and fossils from Santorini and other parts of Greece, as well 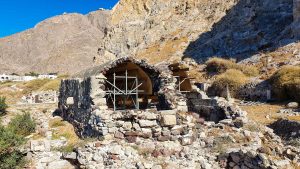 At the northern end of the village of Perissa, at the foot of the peak of Mesa Vouno (365 m), there are unique archaeological excavations – the ruins of the church of St Irene from the 13th – 9th centuries AD. It is probably from it that the island of Santorini takes its name. 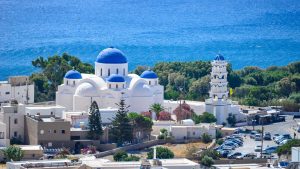 Church of the Holy Cross in Perissa

The Church of the Holy Cross in Perissa on Santorini is one of the largest churches on the island. It is located on the outskirts of the town, near the beach, at the foot of the Mesa Vouno hill. 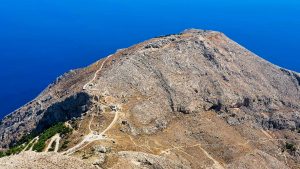 ancient Thera in Santorini was an ancient city that was located in the south-eastern part of the island on a rocky mountain called Mesa Vouno, over 360 meters above sea level. Currently, this place is adjacent to two very popular towns on the opposite sides of the mountain – Kamari and Perissa. 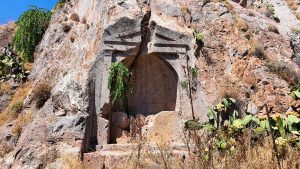 Near the village of Vlychada and Cape Exomitis, on the southern slope of Gavrilos Hill, are rock-cut ancient tombs (also known as Ancient Echendra) dating from 400-200 centuries BC.

Perissa Beach in Santorini is a long beach filled with tiny volcanic pebbles that sometimes take a sand-like form. Due to its characteristic dark shade, this litter likes to warm up quickly. Especially in the middle of summer, you will need flip-flops or water shoes to move around which later can be used in the sea.

Perivolos is located on the south-eastern coast of Santorini and is situated between two other well-known beaches Perissa Beach and Agios Georgis. This area is very popular among tourists visiting the island. None of the aforementioned beaches have clearly defined borders, you can go for a long walk along the seashore and admire beautiful views of the coast. 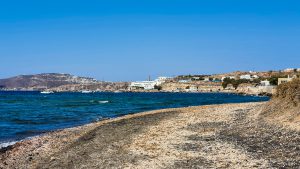 Exomitis Beach in Santorini is located in the south of the island, on the cape bearing the same name. It is the next, after Agios Georgios, of the beaches stretching along the southeastern coast. However, unlike the others, this one is not organized and is less frequently visited.

The modern town of Perissa has been developing dynamically since recently, since the second half of the twentieth century. However, it is interesting what happened on its territory hundreds of years earlier.

Perissa lies on the site of the ancient port city of Eleusis, first mentioned by Ptolemy (a scholar living in the years 100-170 CE) and discovered by archaeologists in 1836. You can still see the evidence of its existence today – see Ancient Eleusis.

In early Christian times, there was another city here, as evidenced by the existence of the ruins of the basilica from the V-VI centuries CE, located at the foot of the Mesa Vouno mountain. Most likely, from the name of the patron saint of the basilica (St. Irene) comes the name of the entire Santorini archipelago. This city probably declined after the eruption of the volcano in 726.

Perissa has less than 700 permanent residents (according to the 2011 census). Residents are employed mainly in the tourism sector, as well as in agriculture.

During the holiday season, many thousands of tourists come to Perissa. Some live in one of the numerous hotels or accommodation units in the village, others come here from other resorts. This is not a problem on Santorini, because Santorini is 18 km long and 12 km wide and thanks to well-developed public transport and road network it takes no more than about half an hour to get here from the other end of the island.

Perissa owes its popularity to its wide, sandy beach, which stretches for 7 km. This beach is unusual, because the sand is of volcanic origin and has a black colour, which combined with the blue water of the sea looks very picturesque. The descent from the beach to the sea is very gentle and safe for children. At the northern end of the village, we will even find a special slope for wheelchairs. In addition, the beach is guarded, we will find here several lifeguard stations. Nearby hills protect it from strong winds, thanks to which the waves are usually not too high here.

Perissa has a very well-developed tourist infrastructure. Along the beach runs a wide promenade with numerous restaurants, cafes, and bars. Most of them provide tourists with sun loungers. On the beach there are numerous changing rooms and showers.

On the beach there are also equipment rentals for windsurfing, water skiing, kayaking, jet skiing and diving. Those who want a break from sunbathing and water can rent bicycles or quads and go on a trip to admire the nearest surrounding area. A water taxi service operates daily in high season to the neighbouring town of Kamari.

Being in Perissa, it is definitely worth going to the Mesa Vuono mountain. At its top there are ruins of ancient Thera – a city from a few thousand years ago, which is definitely a must-see while in Santorini. From the top, you can also enjoy stunning views of the Aegean Sea and the nearby islands.

A distinctive landmark towering over the surrounding area is the Church of the Holy Cross. It is the largest church on Santorini, with 5 blue domes and an ornate bell tower. It was damaged by the 1956 earthquake but has been rebuilt. Right next to it are interesting ruins of the early Christian Basilica of St. Irene and the Museum of Minerals and Fossils.

During the holiday season in Perissa (and throughout Santorini), the air temperature does not fall below 28 degrees Celsius and there is almost no rainfall. This is the best time to arrive for sunbathers thirsty for heat and full sun. In spring and autumn, temperatures are more moderate and fluctuate around 20 degrees Celsius.

In Perissa you will find many restaurants (most of them located on the promenade) serving regional Mediterranean cuisine, seafood, and fish. There are also many bars where you can eat fast food (gyros, burger, casseroles) for less money.

Perissa provides tourists with entertainment until the very dawn. Beach bars and clubs are open all night.

In Perissa you will find numerous mini-markets and shops with souvenirs and beach accessories. For larger shopping, it is worth going to the neighbouring Emporio (on the road leading from Perissa to Emporio there is, among others, a large chain supermarket Σκλαβενιτης).

A large car park can be found at the northern boundary of Perissa (at the foot of the Mesa Vouno mountain). Parking spaces can also be found in the neighbouring village of Perivolos.

What to do in Perissa?

How far is Perissa from Fira?

Is Perissa a good place to stay?

Yes, Perissa is a good choice when it comes to staying on Santorini.

Perissa is a holiday town, with a long sandy beach with full infrastructure (sun loungers, umbrellas) and a gentle descent to the sea. Perissa has a long promenade full of cafes, restaurants and beach shops. The accommodation base is very well developed and cheaper accommodation options can be found.

Where is Perissa in Santorini?

Perissa is located on the south-east coast of the island of Santorini, at the foot of the Mesa Vouno Mountain.

Is Perissa or Kamari better?

Kamari and Perissa are two similar towns, located on two sides of the Mesa Vouno Mountain. Both have a flat sandy beach, a long promenade and a well-developed tourist infrastructure. Kamari is a slightly larger village than Perissa.

Can you walk from Perissa to Kamari?

Yes, it is possible to walk from Perissa to Kamari along the trail leading down the slopes of Mesa Vouno via the Sellada Pass. However, you need to be prepared for a hike of several hours (one way).

No, Perissa is one of the cheaper destinations on Santorini. You will find many cheaper accommodations here (also of a lower standard). Prices in restaurants and bars are also lower (relative to those in establishments on the edge of the caldera).

There are several chain supermarkets in Perissa where you can do your grocery shopping at affordable prices.

Perissa on the map