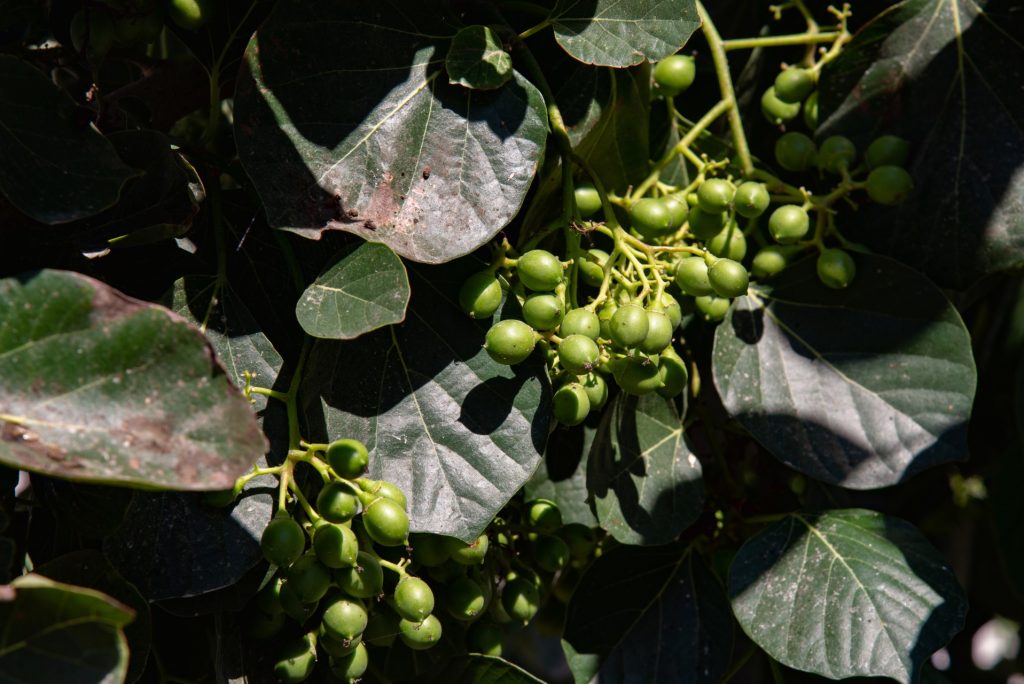 Santorini is a fairy tale Greek island located in the Cyclades archipelago. While enjoying its charms during your holiday, you should try some of the local products that are characteristic of this place.

Although conditions are quite harsh, the volcanic ash that fell on the island after the great eruption turned the solid rock into fertile soil, suitable for growing vegetables and fruit.

So let us take a look at some of the Santorini products.

They look like classic cherry tomatoes (one tomato weighs between 15 and 30 g, is round and slightly flattened). Their taste is surprisingly sweet and intense. This is due to the volcanic soil, rich in nutrients, and the small amount of water available to them, which they draw from the morning mist (the tomatoes are not watered additionally) and the high humidity of Santorini. They take just under three months to ripen (harvesting traditionally takes place in June and July).

Santorini tomatoes are characterised by their slightly dry flesh, distinct aroma and intense sweetness intertwined with an acidic aftertaste. They are the ideal base for the much-loved Greek tomato paste “pelte”.

The inhabitants of Santorini also like to sun-dry them, prepare them raw (as a salad topping) or pan-fry them. One of the most popular dishes containing them is domatokeftedes – small pancakes of chopped tomatoes, onions and herbs fried in olive oil.

Cherry tomatoes were brought to Greece by Fragkiskos, the abbot of a monastery on the island of Syros, in the first half of the 19th century. They have been cultivated on Santorini since 1875, although by now most of the plantations have been closed (as a result of the development of tourism on the island, their cultivation is no longer profitable).

You can learn about the history of tomato growing and processing on Santorini (at its peak there were as many as 14 factories on the island!) by visiting the Tomato Museum in Vlychada. 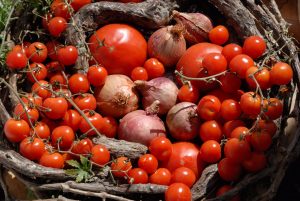 These are very specific in taste buds of shrubs that grow on the rocky slopes of Santorini. They can also be found hanging from the caldera cliffs or from the walls of buildings.

They are rich in nutrients: mineral salts with iodine, vitamins B, C, K, E and A. They have a very intense, pungent aroma and a sharp, astringent, slightly spicy taste.

Capers are a very popular Greek ingredient in many dishes, including salads and fava (pea puree). The edible parts of capers are the buds (kaparokoumba) and the leaves (kaparofilla). They are rinsed and soaked several times before serving and marinated in vinegar and water with salt. They are also available in dried form.

A rare variety of aubergine, characterised by its white colour and delicate, sweet flavour. Here lies the difference from the purple aubergines we know from our kitchen – aubergines from Santorini are sweeter and contain fewer seeds (or almost none). Moreover, they do not have the characteristic bitterness of the “classic” aubergines.

In Greece, white aubergines are served in many different and tasty ways: as the main ingredient of the Greek specialty moussaka (a casserole of meat and aubergines), fried as a delicious paste melitzanosalata or raw as a perfect ingredient of salads. They are also popular with the appetizer Backed aubergine, which is baked aubergine with garlic and onion.

It is a goat cheese with a light texture and distinctive flavour. Due to its limited production capacity (its manufacture is very time-consuming), it can only be found in a few restaurants and regional food shops.

Chloro cheese is sometimes used as a substitute for feta in a classic Greek salad. It also tastes great as a separate snack or with the addition of onion.

It is made from fresh milk straight from the goat, which is then filtered through a cloth and heated. A thickener called ‘pytia’ is added, then the whole thing is strained, poured into a mould and sprinkled with salt.

A well-known yet rare herb in Santorini. It resembles arugula in appearance. It is known as a natural, effective weapon in the fight against cholesterol. The season for Kardamides begins in spring and early summer, and when properly harvested and stored, it makes an excellent accompaniment to fresh fish and other dishes.