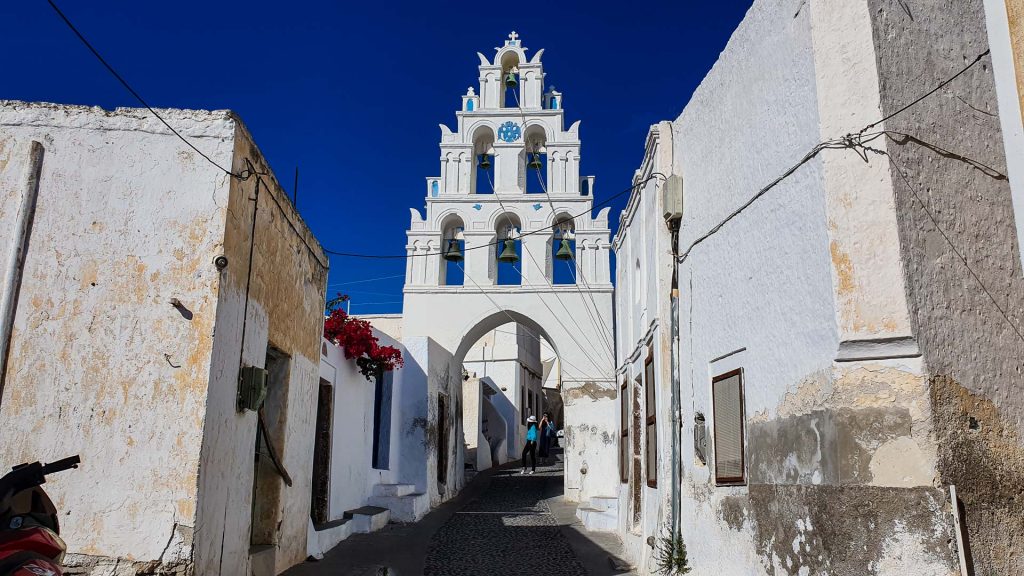 Megalochori is a charming town located in the south-west of Santorini. It is located between a beautiful caldera in the west and a vast plain full of vineyards in the east. Despite rapid and aggressive development of tourism on the island in recent years, Megalochori has managed to preserve its unique character.

The town is inhabited by about six hundred permanent residents (according to the 2011 census). Most of the population work as farmers engaged in growing grapes, tomatoes, and other vegetables. Residents also find employment in the tourism industry (as owners or employees of accommodation facilities, restaurants, souvenir shops and tourist attractions).

Megalochori consists of many small, white-painted houses with a blue finish, built tightly, one next to the other. You will also find here beautiful neoclassical villas with walled courtyards.  Tourists can stroll through the charming, narrow streets of the town, admiring the courtyards full of flowers.

Nowadays, thanks to the involvement of residents, as well as the support from local businessmen, many historic houses are being renovated. A significant part of them already pleases visitors with its architectural beauty. The history of some of the houses dates to the seventeenth century.

Megalochori is the centre of the wine industry in Santorini. The village is surrounded by many vineyards. Some of the most famous are Antoniou, Boutari and Gavalas. Megalochori is a place where you can get to know the rich wine tradition of the island “from the inside out”, walking among the vineyards with vines trained into characteristic “baskets”. What’s more, some of the vineyards are open to tourists.

Megalochori is not located on the seacoast. However, on the caldera side, you can visit the beaches of Caldera, Thermi and Plaka located a short distance away. The Caldera beach is accessible by car (the distance to travel is about 4 km). The other two beaches cannot be reached by car. They are only accessible on foot (be prepared to go down the steep path down the caldera).

The village of Megalochori is a labyrinth of white Cycladic houses, narrow streets and churches with blue domes and bell towers. It is the bell towers that are the icon and symbol of Megalochori.

In the centre of the village there is a characteristic square with taverns, restaurants, and a small park. It is surrounded by several trees, allowing you to take shelter from the sun and breathe for a while with freshly brewed Greek coffee. The square is the heart of Megalochori and is a meeting place for residents.

At the square stands one of the most famous churches in Megalochori – Panagia ton Eisodion, with a characteristic bell tower. Next to the church there is a monument commemorating the fallen in defence of the homeland in the wars of 1912-1923.

One of the attractions waiting for tourists in Megalochori is the Symposion by La Ponta Museum, which is in an old vineyard. The place offers interesting exhibitions and workshops, mainly on music. Visitors can admire, among other things, the exhibition, and workshops of tsabouna (traditional Greek bagpipes), as well as other regional instruments. The museum also organizes daily guided tours, workshops, and music performance series.

Also noteworthy is the Lost Atlantis Museum, created on a private initiative on the outskirts of the village. The aim of the museum is to promote Greek heritage, culture, and mythology. This is the first museum in the world where you can learn everything about the myth of the lost Atlantis. The museum tries to answer the question: was it the ancient Santorini from the time before the great volcanic eruption that was the lost Atlantis described by Plato?

Another important point on the map of attractions and monuments of Megalochori are the picturesque churches. Throughout the village you can admire the beauty of many charming chapels.

Tourists are also interested in the chapel of Agios Nikolaos, built on the cliffs of the caldera, not because of its historic character, but picturesque location, from where you can admire the beautiful sunsets.

Accommodation and catering in Megalochori

In Megalochori, travellers can stay in dozens of accommodation facilities – intimate hotels, luxury apartments and villas. Each accommodation offers a unique view of the beautiful surroundings. Those located on the west side of the town – also on the caldera. Prices in the summer season for accommodation for two people range from 60 EURO to even 1.500 EURO, and in the winter season from 60 EURO to 450 EURO. These prices change depending on the length of stay, the number of people, and class of the place.

In the village you will also find numerous shops with souvenirs and handicrafts produced by the locals (handbags, shoes, ornaments, jewellery, leather goods).

Megalochori is not an entertainment place – you will not find here clubs, discos or drink bars operating late into the night. The village is rather oriented towards tourists who want to relax in peace and quiet.

There is a modern children’s playground and basketball court at the southern end of Megalochori.