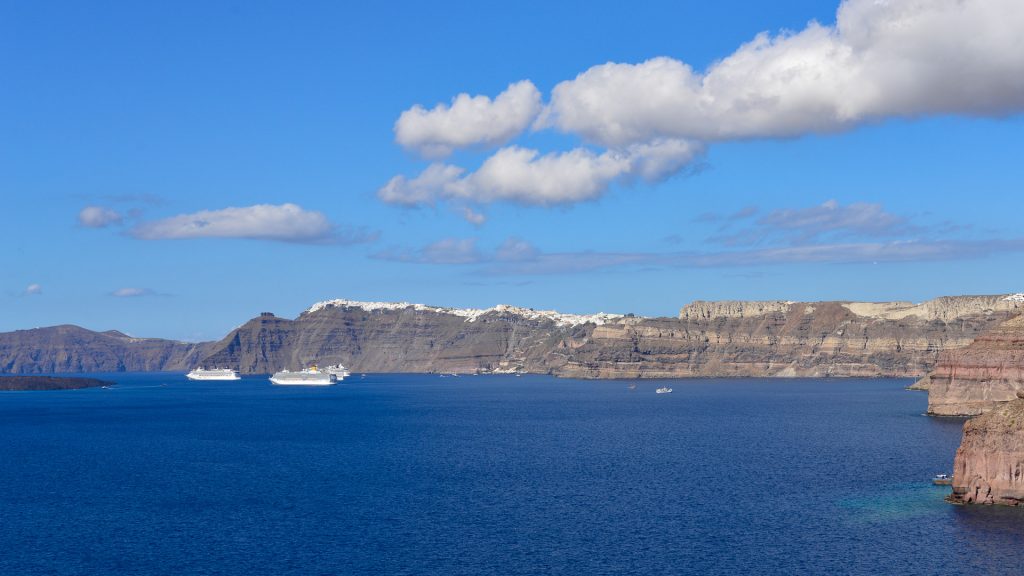 The caldera of Santorini is currently one of the most famous and popular tourist destinations in Greece. It lies in the Aegean Sea, about 120 km north of Crete. It is here on the rocky slopes that the most luxurious hotels are built, architecturally referring to the Cycladic tradition. Despite high prices, tourists very willingly come to Santorini, lured by the extraordinary views, picturesque sunsets and volcanic beaches.

Santorini caldera – a few interesting facts to start with…

The caldera of Santorini is mainly known for tourist destinations such as Fira (the capital of the island), Oia and Imerovigli. In the latter village there is the highest point of the caldera – at an altitude of 330 m above sea level.

The very word “caldera” comes from Spanish and literally translates to “cauldron”.

Over the years, the natural landscape of the island has changed considerably, mainly due to tourist development and related construction activities. One of the least affected places by civilisation on Santorini is Therasia, especially Cape Tripiti. It is from here that you can admire one of the most unusual formations of volcanic rocks, looking like frozen lava.

When visiting the Greek island of Santorini, it is absolutely necessary to find time not only for sightseeing, but also, and perhaps above all, for relaxation. Ideally suited for this are the local beaches. Although those that are located on the side of the caldera are more difficult to access, the effort will reward us with a stunning view of the Santorini archipelago and one of the biggest local attractions – the volcano.

Ports of Santorini, facing the caldera:

The volcanic nature of the Cycladic islands, including Santorini

The Cycladic islands were created by tectonic movements and are situated on a small Aegean microplate. Hence the conical shape of most of the islands, protruding from the sea almost in the shape of undersea mountains. The exception is a few islands of volcanic origin. These include the famous Santorini, the volcanic islands of Methana, Milos and the island of Nisyros with a large, young crater Stefanos.

The caldera of Santorini is an extremely interesting example of a geological and natural formation. The group of islands, officially called Thera, consists of the main island of Thera (approx. 76 km2 and approx. 7,500 thousand inhabitants), Therasia (9.3 km2 and approx. 250 inhabitants), and small, uninhabited: Aspronisi (0.1 km2). In the middle of the lagoon there are Palea Kameni (0.5 km2) and Nea Kameni (3.4 km2), uninhabited, built of frozen volcanic rocks. The main island of Thera surrounds the center of the former volcanic activity in a semi-circle, creating a caldera.

The history of the creation of the Caldera of Santorini

The Santorini archipelago was formed over millions of years and during that time it changed its shape many times. A caldera resembling the present one was formed only about 3600 years ago during the great Minoan eruption.

Let us take a look at the different phases of the archipelago’s development and the changes occurring to the Caldera:

Actually today’s Santorini is only a memory of the closed circle-like first island Stroggili from the times of the flourishing Minoan culture.  About 1600 years ago the so-called “Minoan eruption” caused the breaking of the coastline of the circle and the almost complete destruction of the then human settlements.

Was this the end of the lost Atlantis? This is still an unexplained mystery. Nevertheless, this catastrophe initiated an extraordinary development of the islands in a natural and geographical sense.

Currently, the caldera of Santorini is a sprawling 12 by 7 km (7.5 by 4.3 mi) basin with a depth of up to 400 m. The sides of the caldera are steep walls with height of up to 330 m above sea level. (the highest point of the caldera is in the town of Imerovigli).

The caldera of Santorini can be admired from many places on the island, each of them looks almost equally delightful and photogenic. Below we present some of them (from north to south):

It’s also worth taking a boat trip through the waters of the caldera to admire the view from the volcano Nea Kameni in the middle of the bay and the neighbouring, peaceful island of Therasia.