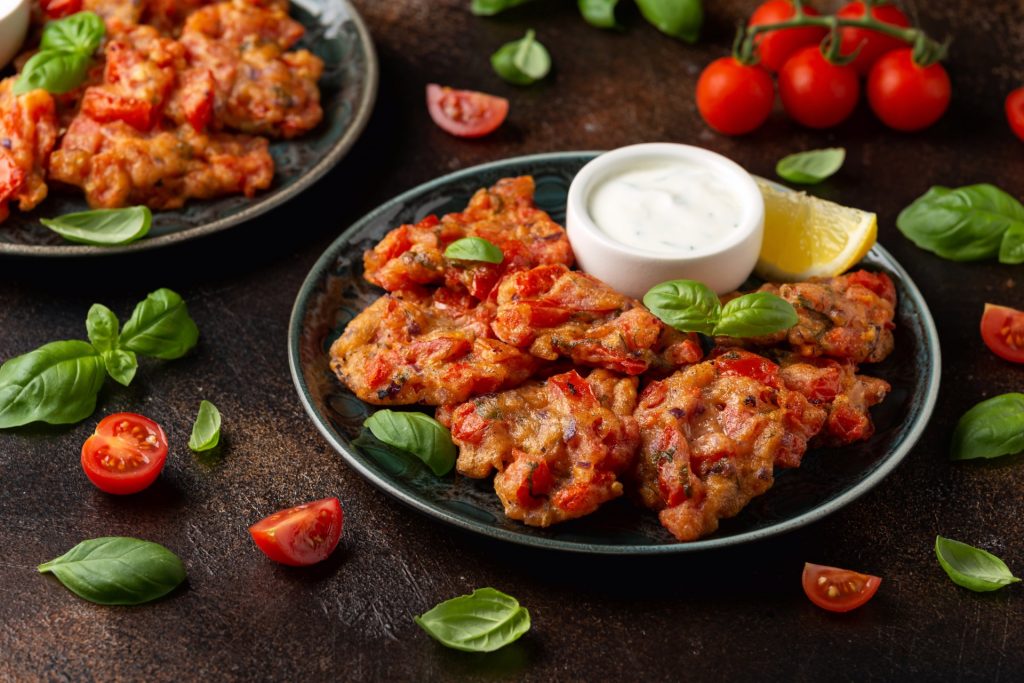 Santorini is one of the most beautiful islands in the world, formed by multiple eruptions of the volcano located in the centre of the caldera. Before the first tourists appeared, the inhabitants of Santorini lived modestly. They lived from agriculture. They grew cereals, legumes and a few vegetables. Animal husbandry was very limited due to the lack of meadows and pastures. No wonder that traditional dishes on Santorini are mainly vegetarian.

Mediterranean cuisine is one of the healthiest cuisines recommended by nutritionists. By eating the traditional dishes of Santorini we can find out that vegan and vegetarian dishes are delicious. The island’s inhabitants lived for years on what the volcanic soil brought them. It is a very healthy cuisine, which delights with original flavours and aromas obtained with the help of various herbs. Dishes from Santorini captivate us not only with their taste, but also with the simplicity of their ingredients.

Fava is a puree made from yellow peas grown in the fertile volcanic soil of Santorini, cooked and blended. Lemon juice, caramelized onions, salt and good quality olive oil are added. It tastes best hot, but can also be eaten cold. It is often served with bread and a glass of wine.

It is ideal for vegetarians and vegans, also due to its high protein content.

Fava is available in different versions – e.g. with capers and tomato sauce, as well as with smoked pork (“kabourma”), lard, in the form of meatballs and pancakes.

Fava peas are a source of vitamin B1 (thiamine), iron, copper, phosphorus, calcium and magnesium, folic acid and manganese.

Fava peas, whose exact Latin name is ‘Lathyrus Clymenum L.’, have been grown exclusively on Santorini for more than 3 500 years (as evidenced by the Fava seeds found by archaeologists at the Akrotiri excavation site).

Tomatokeftedes are tomato fritters. They are best made with the unique, small tomatoes found on the island of Santorini.These aromatic, sweet vegetables are grown on the island’s volcanic soils, and thanks to the relatively dry conditions in which they grow, they have the right dense consistency. The addition of herbs such as oregano, mint and parsley make the tomato pancakes very aromatic and refreshing – just right for the hot summer days.

This is another starter which consists of very simple ingredients and is ideal for vegans and vegetarians.

Apart from tomatoes, onions and herbs, we use a small amount of flour. The pancakes are shaped like potato pancakes. Serve with natural Greek yoghurt or tzatziki.

Kopania are simple, delicious, sweet cookies baked without sugar and without fat. Their main ingredients are barley rusk, sultanas and sesame.

The ingredients are blended to a homogeneous mass. The resulting mixture is formed into balls. They are then coated in sesame. Kopania cookies look like pralines. They can be eaten immediately after making or put in the fridge for some time – then they become more solid. They are also a snack for people who are trying to eat healthily.

They can be found in various variations – for example with the addition of coconut shavings, liqueur and wine. Kopania is one of the most characteristic sweet local snacks on Santorini.

Melitinia are highly aromatic cheese biscuits. The texture of the cheese mass is similar to that of classic cheesecake, but it does not contain any extra fat. It is made from the local whey cheese mizithra with the addition of powdered mastic (mastiha), that is resin extracted from the pistachio tree.

The Greeks add cinnamon, cloves and sesame. It is placed in discs of thin dough with a thin edge, about 2 cm high, and baked in the oven. The main ingredients are flour and water. The dough is somewhat like dumpling dough. A little sugar is added.

It can also be compared to pita dough. This seems more reasonable, considering that we are talking about Greek specialities.

They look like muffins with white cheese. Melitinia cookies are a traditional pastry served on the occasion of Easter, but you can also get them in many pastry shops and bakeries on the island.

The name of the cookies comes from the ancient Greek word “melitero” meaning “sweet as honey”.

After vegan and vegetarian dishes, it’s time for a meat dish straight from the island of Santorini. Greek sausage apochti is pork covered with salt, which is then marinated for several days in vinegar. The final stage is drying the pork in the sun and wind. Once the meat is dried, it is coated in a variety of spices (mainly pepper and cinnamon) to give it its original flavour and is then set aside for another few hours. It is a very aromatic, slightly salty and lean sausage that tastes best with Greek wine.