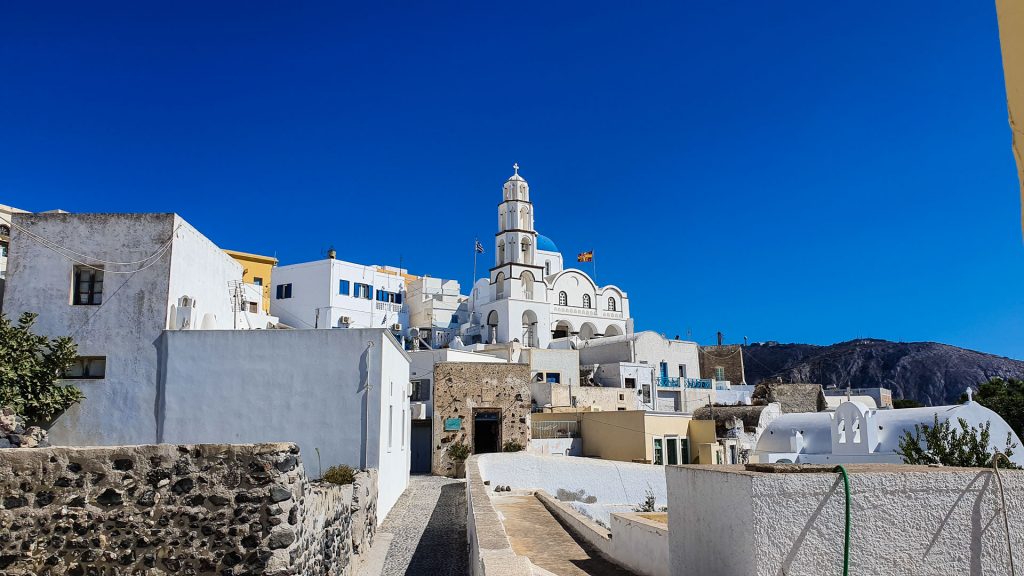 Pyrgos is a town located in the central part of the island, on the north-western slope of The Profitis Ilias Mountain, about 7 km from the capital of the island of Santorini, called Fira.

Some sources say that Pyrgos was once the capital of the island, but you can find conflicting information about it. However, there is no doubt that it was an important town, also due to its strategic location.

Pyrgos itself has no access to the Aegean Sea but is a short distance away. From the village to the beach, you can get by car in about 10 minutes (the nearest beach in Kamari is about 5 km away, and the caldera – just over 3 km away).

The distance from Pyrgos to the capital of Santorini – Fira, is about 5 km. A similar distance must be covered to get to the airport. Pyrgos belongs to the administrative unit of South Aegean, the regional unit (municipality) of Thira.

The meaning of the name of the village is related to its rather high location – “pýrgos” means tower, which emphasizes that this place is a great observation point.

The population of Pyrgos is about 900 people (according to the 2011 census).

In the highest place in the town there are ruins of the castle, called Kasteli in Greek. The castle has only one entrance called “Porta”. As in all castles located in Santorini, near the entrance gate, there is the church of Agia Theodosia.

Under the castle there was once a system of underground passages, which, if necessary, served as a shelter and escape route. Part of the castle suffered heavily during the earthquake that took place in 1956, but it was partially rebuilt.

One of the most distinctive buildings located in the area of Pyrgos is the historic Church of the Presentation of the Virgin Mary (Eisodion tis Theotoku), which was built in 1660. It is one of the largest and most frequented temples on the island of Santorini. Inside, you can find a wood-carved altar with icons depicting saints. An indulgence is granted, and a traditional procession takes place in this church on August 15 each year.

In addition, in Pyrgos you will find two interesting museums – the Museum of Icons and Relics located in the former church of Agia Triada and Santorini of the past – a private museum showing the history and culture of the island. 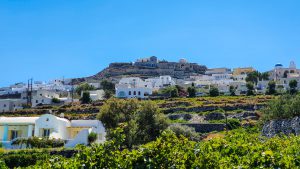 Pyrgos Castle on Santorini is one of the five Venetian castles found on the island. Their main purpose was to give shelter to the inhabitants during pirate attacks and invasions 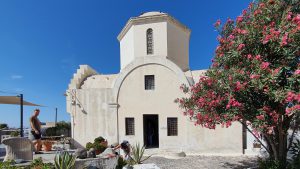 Museum of Icons and Relics in Pyrgos

Although the Museum of Icons and Relics on Santorini is small, it has in its collection beautiful and valuable icons, sculptures, relics, vestments, books and other objects related to the 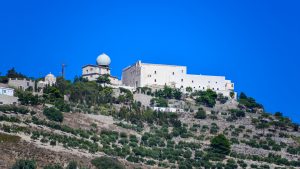 One of the oldest and most impressive of its kind is the Orthodox Monastery of Prophet Elijah (Monastyr Prophet Elias). It is located on the highest peak of the island of Santorini (567 meters / 1860 feet above sea level). 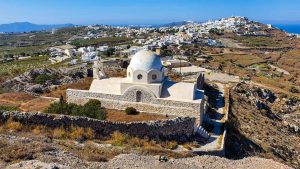 Church of the Holy Apostles near Pyrgos

The Church of the Holy Apostles near Pyrgos on Santorini is not one of the most historic churches on the island, but it is also well worth a visit for

Pyrgos is one of the least modified by mass tourism destinations in Santorini. Despite hosting many tourists every year, it has managed to preserve its former character in an almost unchanged form.

The village of Pyrgos is located on the route leading to the highest peak of the island – Profitis Ilias, which, together with the monastery located on its top, are an inherent element of numerous trips from coastal towns. Due to its location, Pyrgos is also an excellent vantage point for almost the entire island.

The village of Pyrgos is not a typical Santorini tourist destination with dozens of hotels and guesthouses. However, it offers all sorts of places where you can book accommodation, and some of the rooms and apartments for rent are in historic buildings or traditional houses carved in the rocks, where you can empathize with the unique atmosphere of this place.

Since Pyrgos is located a few kilometres away from the sea, many facilities (the more luxurious ones) provide access to a mini swimming pool or jacuzzi. However, you will not find large hotels or apartment buildings here. Most hosts offer a maximum of a few rooms or suites for rent. The cost of renting a two-person apartment in the season ranges from 70 to 1000 euros per night. For rent there are both small rooms and studios with basic equipment, as well as luxurious, large-area apartments and villas.

The offer is also wide when it comes to available restaurants. You can try mainly local Mediterranean specialties, fish, grilled meats and seafood. The village of Pyrgos also boasts numerous cafes where you can spend a lazy afternoon sipping freshly brewed Greek coffee.

Pyrgos on the map