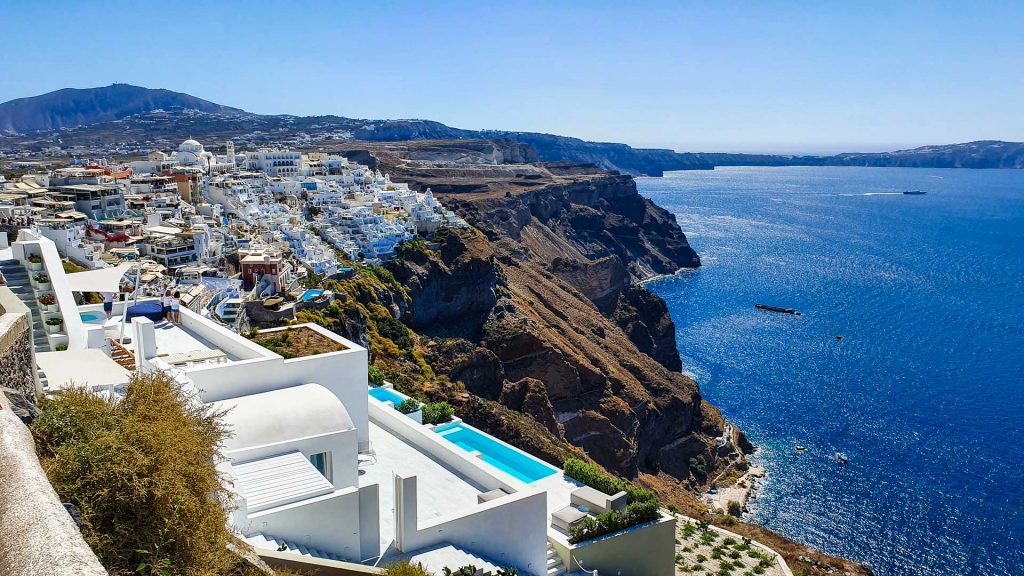 Fira is in the central-western part of the island, at an altitude of 200 to 300 metres above sea level. It is worth noting that Fira is not located directly on the seashore (which may be surprising for some tourists) and has no direct access to any beach. It is situated on top of the caldera cliff, and its western part descends into a vast plain.

Fira belongs to the administrative unit of South Aegean, the regional unit (municipality) of Thira. On the north side it is next to the village of Imerovigli. The nearest villages on the south side are Karterados and Mesaria.

Fira is 5 km from the airport and 8 km from the Santorini main ferry port Órmos Athiniós.

The name of Fira derives from the ancient name of the entire island (Thira).

Population and society of Fira

Fira is a small city inhabited by about 1600 permanent residents (according to the 2011 census). During the holiday season, however, thousands of tourists from all over the world (mainly Europe, the United States and Asia) flock to Fira.

Residents of Fira find employment mainly in the tourism sector (as employees and owners of accommodation facilities, restaurants, cafes, attractions) and commercial sector.

The very sight of Fira is impressive. It is built on the edge of a cliff falling into the sea, and its slope is covered with snow-white residential buildings and churches (buildings of this type are characteristic of many villages in Santorini).

Car traffic in the very tourist part of Fira (promenade, streets with souvenir shops and restaurants) is limited, so you can safely walk peacefully without worrying about being hit.

Monuments and attractions of Fira

There are many interesting objects in Fira that are worth seeing. Unfortunately, not all of them have survived in their original form – some of them were seriously damaged during the earthquake in 1956. However, many of them have been rebuilt.

This was the case, among others, with the Orthodox Metropolitan Cathedral – one of the largest and most distinctive churches on the island.

In the northern part of Fira there is another famous church – the Catholic Cathedral of St. John. Its reconstruction took almost 20 years.

Also worth visiting are interesting museums – the Museum of Prehistoric Thera showing the civilizational achievements of the Cyclades in the prehistoric period and the Archaeological Museum, where objects from various historical epochs, mainly antiquity, are exhibited.

During the holiday season, the ethnographic museum Megaro Gyzi is also open to tourists, where exhibitions and concerts are also organized.

Very interesting is the Folklore Museum with its original winery. The very seat of the museum is intriguing, because it is in a building from the nineteenth century hollowed out in the rock.

One of Fira’s biggest attractions is the cable car, which takes you down (and later back up) to the Old Port. From there start one-day trips to the volcano located in the middle of the caldera, to the hot springs and to the neighbouring island of Therasia. There is also an old road leading to the Old Port – stone stairs.

While walking around Fira, you can relax in many pubs or sit on a bench and admire the fabulous views of the caldera. Especially beautiful are the views from the highest (northern) part of the town and from the promenade running along the cliff.

The city of Fira was founded in its present location in the second half of the 18th century. After a strong earthquake that had destroyed part of the fortified city located on Skaros Rock, the inhabitants decided to move to another place.

Fira is a bustling town living off tourism. You can easily book accommodation in hotels of quite different quality, luxury apartments, private accommodation and hostels.

You can go to Fira throughout the year because the air temperature is almost always above 15 degrees Celsius. The greatest heat and crowding are from June to September. Those who want to avoid it should decide to travel in other months. Then the prices of accommodation fall, the room can be rented from 25 euros per person per night (in the high season it is difficult to find accommodation for less than 50-60 euros). Accommodation in luxury hotels and villas is much more expensive and starts from 250 euros per night.

Due to the lack of easy access to the sea and beaches, many accommodation facilities of a higher standard offer private mini-pools and jacuzzies.

On the charming, narrow streets of Fira there are many food premises, which serve mainly Greek cuisine and seafood. You can also find places with European or Asian cuisine, as well as many fast foods serving gyros, bureks, burgers or pizzas.

Fira also offers its guests entertainment in many discos and clubs, which are open until dawn. Fira is the undisputed entertainment centre of the island.

Fira is geared towards mass tourism, including wealthy tourists accustomed to luxury. On the tourist avenues there are shops of well-known world brands such as Chanel, Dior, Prada, Gucci, Rolex. Fira is the perfect place to spend a luxury holiday. During walks through its streets, you can meet many famous actors and celebrities from around the world.

There are also many small souvenir and jewellery shops in Fira. The most popular is jewellery made of lava. Local artists sell their products in many mini art galleries and handicraft shops.

Fira is the central transport hub of the island, and you can easily get from it to the nearby beaches or other interesting places on the island by public transport. The main bus station is located between the Prehistoric Thera Museum and the Hospital of Fira.

Motorized tourists can leave their car in one of the many car parks found on the outskirts of the city. 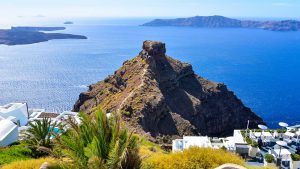 Skaros Rock is a large volcanic promontory extending into Santorini’s caldera, on which are the (now barely visible) ruins of the fortress of Kasteli, built between 1205 and 1230. The promontory itself was probably formed during a volcanic eruption that took place 68,000 BC. 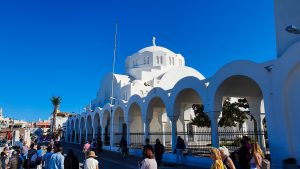 This Orthodox cathedral is also known as the Church of Ypapantis. Both the building itself – white and imposing – and its location on the cliff of the caldera make it look extremely picturesque. 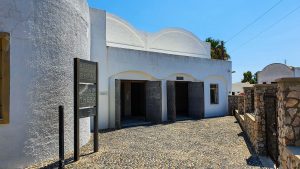 The Museum of Prehistoric Thera on Santorini offers an exhibition on the history of the island and the discoveries associated with it, with a special focus on the most important 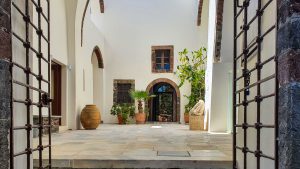 The Megaro Gyzi Museum on Santorini is a unique place. This museum also functions under the name of Megaro Gyzi Cultural Centre or Gyzi Manor. It is located in a 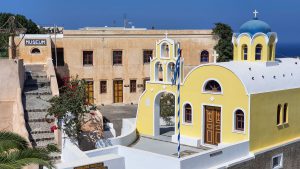 At the Folklore Museum in Thira on Santorini, you can learn about the island’s culture and traditions, and see how the island’s houses and craft workshops looked in the early 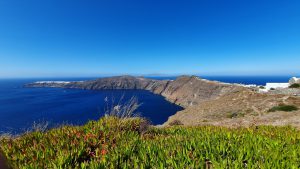 The most famous trail on the island is the Fira – Oia trail. It runs along the caldera between the two most famous villages of Santorini. The road along the 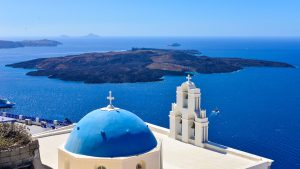 Church of the Three Bells in Fira

The Church of the Three Bells in Fira on Santorini is one of the most famous, photogenic and most photographed Greek Catholic churches on the island. It is also called the Church of the Ascension of the Blessed Virgin Mary. 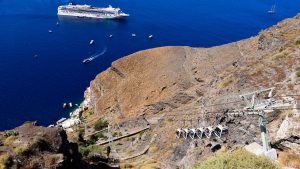 The funicular in Fira on Santorini is an alternative way to get to the old port – the other way is to go on foot (or on a donkey) up and down the long and steep stairs (the elevation here is over 200 m). Passengers of large cruise ships are frequent users of the railway. 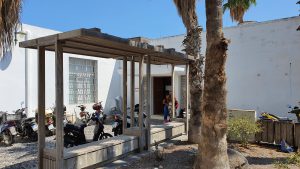 Archaeological Museum of Thera in Fira

Apart from the most famous museum of Prehistoric Thera, there is another archaeological museum in the capital of Santorini (Fira). The smaller and with no doubt less impressive Museum of