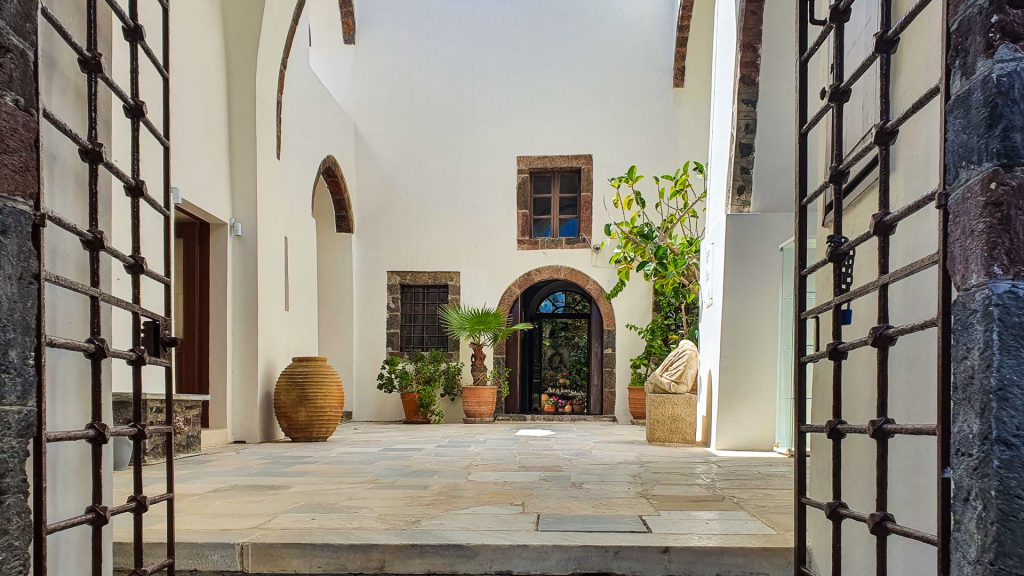 The Megaro Gyzi Museum on Santorini is a unique place. This museum also functions under the name of Megaro Gyzi Cultural Centre or Gyzi Manor. It is located in a property dating back to the

17th century that belonged to the Gyzi family. Since 1980, it is owned by a non-profit organisation founded by the Catholic Diocese of Santorini.

The museum is housed in a 17th century historic building that once belonged to the Venetian Gyzi family. Above the entrance to the building is a large family coat of arms, which also dates back to the 17th century.

After the 1956 earthquake, it was rebuilt and adapted for museum purposes through the efforts of the Catholic Diocese of Santorini (only the basement, once used as a utility room, remains intact).

The residence is very similar to its original state, which was a delight of architectural beauty. The building is built on a cruciform plan with an ornamental dome and numerous rooms to facilitate exhibitions.

Several permanent collections are on display in the residence. These include photographs of Santorini from 1930 to 1956, which were taken by Vicentio Pintos, original engravings, maps and documents from the 16th to 19th century, regional costumes and objects of daily use from that period, and paintings by Vincentio and Pipitsa Pintos.

Particularly noteworthy exhibits in the museum include:

The museum is located in the centre of the island’s capital, Fira, close to St John’s Catholic Cathedral and the upper cable car station.

Megaro Gyzi is intended to be a cultural centre and a centre for the promotion of the island of Santorini. In this connection, exhibitions of painting, photography and sculpture are often held there. It also hosts art installations, theatre performances, lectures, readings, film screenings and chamber concerts.

Since 1981, the entire month of August has been treated as a festival of various events at the Megaro Gyzi Cultural Centre. This tradition was started by Tereza Kokkalak, who was responsible for its organisation for 25 years.

This is when the museum comes alive with numerous installations, concerts, exhibitions and other events. What’s more, admission is free for both residents and tourists. It also hosts the International Piano Festival every year.

In high season (from 1 May to 31 October), the museum is open Monday to Saturday from 10 a.m. to 4 p.m. An ticket for adults costs 3 euros, a ticket for students costs 1.5 euros and children under 10 can visit the museum for free.