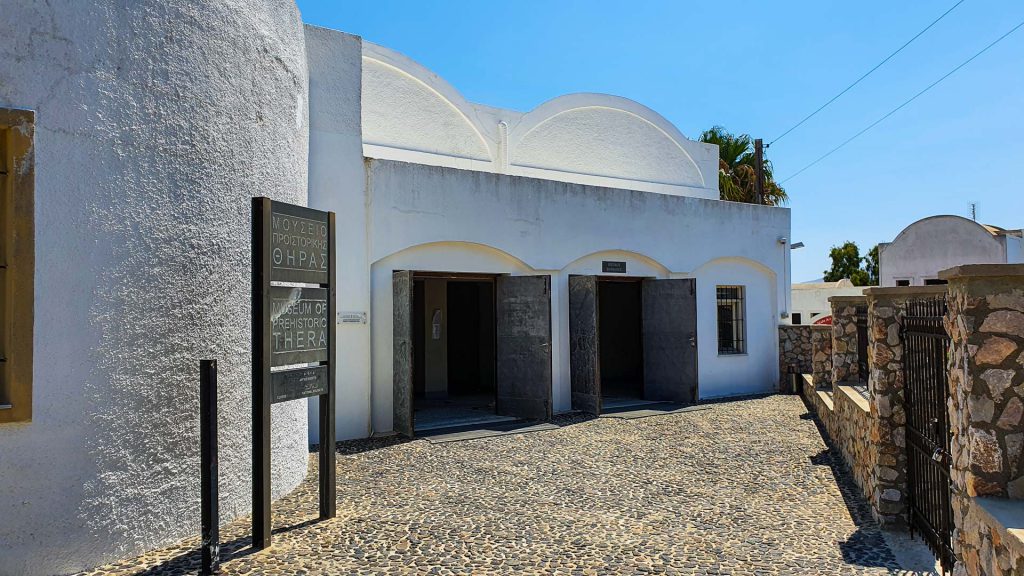 The Museum of Prehistoric Thera on Santorini offers an exhibition on the history of the island and the discoveries associated with it, with a special focus on the most important archaeological site on Santorini – Prehistoric Akrotiri.

The development of Santorini is inextricably linked to the Minoan culture, which took shape from roughly 4000 BC to 1600 BC. The Minoans of Crete traded extensively and explored the Asian shores of present-day Turkey throughout the southern Levant (the eastern, Asian coast of the Mediterranean) and various outposts scattered throughout the Aegean served as a kind of stopovers on sea routes. That allowed many settlements and cities such as the ancient Akrotiri on Santorini to owe their high development rate to the commercial strength, and not necessarily military power.

Location of the Museum

The building of the Museum of Prehistoric Thera is located in the capital of the island of Santorini, Fira, at the junction of Mitropoleos and Dekigala streets. The imposing edifice, towering over the nearby buildings, is adjacent to the Orthodox Metropolitan Cathedral, which is also worth a visit.

The museum mainly collects the results of almost a century and a half of spectacular archaeological excavations that took place on the island. They were started by the research of the French geologist F. Fouque in 1867 and the excavations of the German archaeologist Friedrich Hiller von Gaertringen which were carried out between 1895 and 1900 (the latter were mainly devoted to the discovery of the Ancient Thera located on the top of Mesa Vouno in the vicinity of present-day Kamari).

The Museum of Prehistoric Thera on Santorini houses exhibits and artefacts from various excavation sites. In addition to the previously mentioned Akrotiri, we can also admire findings from Thera, Megalochori, Potamos and Ftellos.

The exhibition contains interesting findings that bear witness to the turbulent history of the island. Thus, we will see geological specimens (such as fossilised plants and insects from the time before the first humans appeared on Santorini), sculptures, ceramics, jewellery, marble figurines, objects of everyday use, as well as wall paintings.

The exhibition is divided into several thematic parts. There are exhibits concerning:

Exhibits worthy of special attention include:

The initiative to establish the museum came from the Greek archaeologist Professor Spyridon Marinatos, long-time director of excavations at the Akrotiri archaeological site.

Most of the exhibits in the museum are very well preserved, as the prehistoric settlement of Akrotiri was buried under volcanic ash deposited after the great eruption of the Santorini volcano in the 17th century BC. The dust proved to be a very good preservative.

Interesting fact – at the archaeological site of Akrotiri no human remains were found and a only small amount of jewellery was found. This probably means that immediately after the eruption of the volcano, the inhabitants fled the island by boat, taking their most valuable possessions with them.

The cost of admission to the Museum of Prehistoric Thera on Santorini is: 6€ and a discounted ticket costs 3€. It is worth considering the option of buying a joint ticket for 15€, in which, in addition to the entrance to the Museum of Prehistoric Thera, we also have access to the most important archaeological sites on the island of Santorini – Akrotiri and Ancient Thera and the second, smaller archaeological museum – the Museum of Ancient Thera in Fira. The ticket is valid for 3 days from the date of purchase.

The museum can be visited free of charge: